Will you trust me to walk on water?

﻿I was painting, totally engrossed in what was in front of me, at the end of the mile long pier.
I didn’t see the storm coming until it was upon me, as the wave crashed to my left, nearly knocking me off the pier and into the jagged rocks. As the wind blew harder, I knew I was in trouble.
It was one of those moments where all you can you utter is “Oh God”! The wind took my nearly finished canvas into the lake, and the rain started pelting me. I gingerly picked my way over the jagged rocks,talking to myself to keep myself from panicking “just a little farther and you’ll be on the flat part of the pier”
I climbed over the old section where the lighthouse used be,and was relieved to finally be on concrete.Now I could move faster,even though I could barely see,as the lightning struck around me.
It was then I realized with horror that the last section of the pier was covered with water. I couldn’t see the pier, but in order to get to safety, I would have to walk across the waves rolling across the pier that I knew was underneath.
I was terrified.
“Will you trust me to walk on water?”
Good grief! Even Peter sank!
God has brought that picture back to my mind, each time I have been in the midst of a storm in my life.
And there have been many storms since then,and these are only a few of the big ones~
A real Storm, in that same area where a tornado hit on the other side of town, during an Art show, where I quickly put all the glass on the ground. I was alone with my three girls and I walked away, leaving everything I had created, in the park, on the ground.
I think I wept for more than a year when my middle daughter was diagnosed with a brain tumor at 13.There were moments of absolute terror, over and over as the tumor came back 3 times.
When I was explaining my father- in law’s pathology report to him, while he was holding my 7 week old son.As I was telling him that there wasn’t successful treatment for pancreatic cancer, my doctor called to tell me that I needed to come in because they found cancer.
When I awoke to hear my son’s wheezing,and we realized the nearest hospital was in the next state.
As I watched the Tsunami hit Sendai,and I waited to hear from my youngest daughter.
Most recently, when my oldest daughter gave birth to lovely Lilli Beth,and there was no word for several hours,until my son in law called saying they wanted to do a transfusion.

“Will you trust me to walk on water?”

35 years ago, I literally walked on water,sobbing as I inched my way across to safety. God in his tremendous mercy kept my feet on the solid pier underneath the waves.

Each time God has whispered ” Will you trust me to walk on water?”
He has POURED his treasures into my life far beyond what I could have asked or imagined IN the MIDST of the storm.
There is blessing, there is Hope, there are treasures to be found, in the midst of the storm. My own self reliance has been put to death,and I have seen Life break forth, peace pour in, provision abound,impossible restoration,and a gift of an unwavering faith that I cannot take credit for.

In the midst of the storms all around, can you hear HIS whisper?

“Will you trust me to walk on water?”

Juli’s art career began at the age of 11, when she used a piece of cardboard and her big sister’s cream eye shadow to create her first work of art. Juli found refuge from a difficult childhood with a loving foster family, who bestowed upon her a marvelous gift ... paints! Thus her love affair with art began to flourish! For over 30 years, Juli has learned to balance her love of Art glass and painting, while raising a family and taking care of ailing loved-ones. Her greatest joy lies in cultivating creativity in others and inspiring a love of nature. “I love putting a paint brush or a piece of glass in someone’s hand and seeing what they create.” Her goal is to nourish wonder and inspire hope in everyone through art, especially those less fortunate in the community. Juli offers classes in painting, fused glass, and nature. Juli is a graduate of The Milan Art Institute, and lives in Mansfield, Ohio, with her husband and son, several rescue cats, a parakeet, a pond full of fish, two grand-serpents and the occasional wildlife that join her on her daily “thankfulness” walks.

I am often asked how long it takes to paint[...] 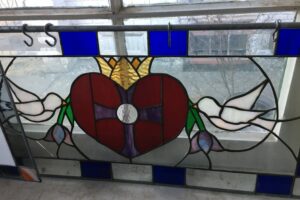 From Brokenness into Beauty

﻿I am often asked how I got started working with[...] 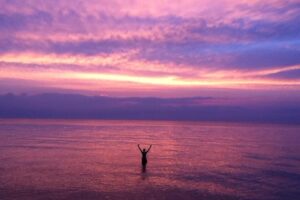 This morning during my Thankfulness walk, it was 63 degrees[...]

Your email is safe with us.

Type and press Enter to search